I EAT IT WITH A FORK AND KNIFE

…till you done ate a Fried Twinkie.  All molten goo on the inside/re-heated donut on the outside, with a dusting of powdered sugar on top…the South has risen. At least until the chapter-elevening Hostess quits [baking?] them at the [laboratory?]  Get your order in now at the Square Biscuit in Northfield, VT.

I’m a miser. I used to think this a terrible word, until I met a friend who described her father as such, with love. Some of my most generous friends are misers. My miserliness stems in part from a poverty mentality, and in part from recycling sickness—a deranged preoccupation with minimal waste. Waste of effort, time, heating oil, coin, anything.

In childhood, I’d save odd bits and refashion them into, say, a spool-and-coaster coffee table for my dollhouse. A cricket cage from diner toothpicks and modeling clay. Seemed normal. I’ve always composted, used soap down to slivers, and stockpiled boxes and packaging materials. It didn’t become a sickness until later, when on vacation I’ll find myself crazily unable to throw out plastic or glass.  I’ll force myself to put a jar in the waste basket. Retrieve it. Wash it. Pack it, and haul it home.  Some consider this normal behavior. But precious few.

Paper I don’t sweat as much because it biodegrades. A colleague once said, “I don’t drink for a month to kid myself that I’m not an alcoholic.”  Throwing out paper makes me feel a rung above the real recychos. But no way I can chuck a magazine, even recycle it. Recycling is a dirty business. Magazines go to my local hospital for maximum usage. Judging by the high-end glossies in the waiting room, I’m not alone. It’s like a library in there.

Now I don’t transport them by horse and buggy, I burn fossil fuels and rubber driving the magazines (“Driving Ms. Magazine”).  I maniacally calculate the best use for other unwanted items and distribute them, at a ridiculous expenditure of thought, time, and gasoline, to the precisely appropriate recipient. The repository can be a person, a consignment shop, a non-profit thrift store, or the free section at the dump.  In that order. A fine pair of pants, for example, cannot go to consignment to be sold at a low price; they must go to a person I know who will value them.  Last place: that global bin thing where, at least if no one buys them, they are shredded into mattress stuffing or something. Zero waste isn’t my goal, but pretty bloody close.

Miserliness. On old sitcoms, there were housewives obsessed with bargains. That is I. If it’s on sale for a dollar off, I’m interested. If there’s also a dollar-off-now coupon on it, I’m in. Doesn’t matter what it is. But because I’m alone, I don’t consume much. So I have to redistribute all the bargains. Trot out the horse and buggy.

Food’s another area of lunacy.  From my waitressing years, watching buckets of meals go into dumpsters, I can’t bear wasting food. One of my favorite buys is the ham salad that delis make from unsliceably thin ham ends that would otherwise be tossed. Once informed that expiration dates on foods err far to the side of caution, I learned to dig markdowns. I’ll buy anything with a $2 OFF sticker, freeze it, and eventually get around to cooking it, knowing it was on its last legs. In the Vermont vernacular, so aren’t I.

My TV is from the dump. You cannot adjust the volume with the remote.  It eats videotapes, which I buy at yard sales. Why do I keep this? It’s madness. Speaking of which.

I was telling a friend about my hand-me-down lawnmower that often wouldn’t start. I’d pull the cord until my arm turned black, cuss, and borrow the neighbor’s. Friend offered me a push mower. “I have five,” he explained with a shrug, “I had a yard sale problem.”  Compulsive bargain-hunting, that. Two maple syrup dispensers (I never make pancakes), a luggage rack (I never have guests), and three round table cloths (I own no round tables) later, I too kicked the habit.

And so the three magical words I honor this Valentine’s Day, a disappointing “holiday” detested by many, are of course not i love you. They are:  reduced to clear. There’s no way I’m ignoring an item marked with those three beauties, unless it’s something so bizarre I don’t know anyone who’d use it.  Which doesn’t leave a whole hell of a lot.  Gummy Geritol®? Gefilte fish off season? Very specific ointments? If I don’t need it, at 75% off I’m perty sure I know someone who does. Catch you in the candy aisle on February 16. Good recycling, good stockpiling, good redistribution, good “holiday”… and good day.

The Devil in a Box 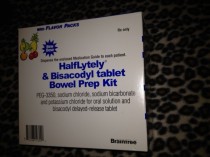 A lifetime of college drinking could not prepare you for a half-gallon of this vile solution, nor for its effects.

“The number of years between now and your first colonoscopy is one measure of happiness.” ~ Unknown

Sooper Cake for a Sooper Bowl 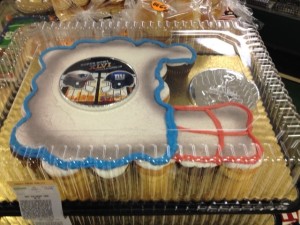 “What is it?” I asked a no-nonsense farm woman at the grocery store.  She glanced briefly. “A helmet.”

Two friends thought it was Louisiana. Which is nowhere near Indiana, New York, or New England. Maybe the mold was left over from Sooper Bowl XLIV–or the prior year’s Mardi Gras.

Or perhaps this baked good was outsourced to Indonesia where they don’t play football. I thought the (edible?) XLVI circle thing should be orient-ated 45 degrees counter-clockwise, but my sources tell me it’s good.  So if you lose your helmet, technically, you could wear this.