Lists Are Good For You

And now a tribute. To the mighty, the daunting, the beloved…the list.

I don’t have a real bucket list. If I did, Disney World® wouldn’t be on it; I didn’t know it was any good. I went to Disney in my 40s by chance. When most people hear, “I’m goin’ to Disney World!” they think Sooperbowl. I think: time capsule, spinning teacups manned by deranged nieces, and Christmas parades with “princes” in wigs with many hair follicles per square inch. Also: pack well. Unexpected weather and unplanned befoulment demand backup.

While a winter trip to a theme park ain’t exactly Christmas in New England, a good way to steel yourself is to get a flu shot then go to one. Disney’s a good bet because as the sweat of many nations and the sputum of the Lands settles upon you, you are exposed to virtually every germ currently available. It is, after all, a small world, certainly for a microbe. And as you build character standing on lines for rides and hear songs that won’t leave your head ever, you leave the prior year behind entirely—often a good idea.

Before I get into a favoured list of deep importance, the annual Fake New Year Predictions, here a short list of things overheard at Disney World:

-Will all the lines be this long?

– It makes the line longer.

– Did you say “teeming thong?!” NO, teeming THRONG.

On to the prescient populist predictions for 2015, submitted by you the people from ME to FL, NH to CA:

North America will break up along the Mississippi and drift apart.

Angelina Jolie will have an affair with Jennifer Aniston.

Office betting pools explode on which former Disney child star will implode next.

Congress will be fined for not working; fined members will be unable to run again.

3D printing will be applied to implants from cheek to calf.

Jenna Bush Hager and Chelsea Clinton will decide to run for president in 2016.

With cheap gas, the price of vintage Hummers will strengthen.

Facebook CEO Mark Zuckerberg will steal the rights to his own life story from himself, then turn it into a multi-billion dollar video game called Zuckerville, a place where he has the rights to all players’ personal information.  Suckerville?

The first smart refrigerator will arrive, voicing the caloric, fat, sodium, sugar, protein and fiber content inside.  It will lock after 8pm and won’t admit entrance until 6am.

Punxsutawney Phil will be canned when he is bitten by a vampire and no longer casts a shadow.

ISIS will splinter off into new factions, one of which by year’s end will become the world’s most popular boy band.

Americans will be required to rescue an animal by paying for its care or adopting it.

Vladimir Putin will be poisoned by an elite squad of journalists.

Putin will come out as gay, step down as President, and marry figure skater Johnny Weir.

The inane patter on award ceremony red carpets will worsen.

I will be befuddled by new social media I’m supposed to master (Yik Yak?).

I will not gain weight (glad you said fake.)

I will stick to my New Year’s resolution to be happy and smile at everyone I meet.

I’m going to have sex every day.

Due to Equatorial Vortex Irene, we’ll have 90-degree days at the end of February.

And my ties for Personal Favorite:

Rather than “predict, I “wish” we could all just slow down, get our faces out of electronic devices and embrace the outdoors…but silly me, then corporations wouldn’t make bank.

We will have weather.

A unifying figure will emerge.

With that, I wish you great list-making, great outcomes, great incomes, and good day.

…and goeth…and leaveth behind a thing of beauty.

Greg Bahr — native Vermonter, neighbor, artistic madman behind Bahr’s Stoneworks — has a far-out genius for putting rocks together. Here’s a recent wall of his in downtown Bethel, incorporating old bottles and bones he found on-site. “Are the bones human?” everyone asks. “I’m not sure,” says Greg.

[Ed. note: Who knows, maybe a barfight behind the Pink Pony one night in the 70s…yes, I’m dating myself…no one remembers the Pony.] 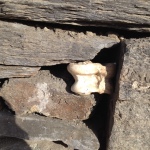 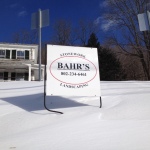 Mix & Mingle in the Jingling Beat 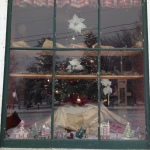 When you hate change as much as I do, things that remain constant are a necessary comfort. Holiday traditions that recur year after year, such as Randolph’s caroling with Santa’s arrival on the green, Woodstock’s horsey Wassail Parade, the Holly Jolly project, and mitten trees provide the longboard I need to surf life’s erratic vicissitudes.

Wrapping presents while watching treacly movies on Lifetime (theme: buff, middle-aged guy new to town chooses charmingly disorganized single mother over outfit-wearing sports-car/golfing lady) or the Hallmark Channel (title: A Bride for Christmas) soothes my holiday prep time no matter what’s going in real life. Which might not be all that good. I’m not mocking these shows. Christmas in Conway enchants, and The Christmas Hope is a bawler. I’m a sap. Akin to treacle.

Another lifesaver is the expressionless decorative light-up pilgrim I bought years ago at Rite-Aid.

About three feet high, he gets dusty after a year in storage and I have a good hoot washing him off every November when I get to his little plastic fanny. Should have purchased the whole expressionless family (stalwart group!). And when Grandma Al and her granddaughter make magic cookies (not the Grateful Dead kind) in their aprons, or I look up Alex Hanson’s gravy recipe online yet again, all is right in the world.

Everything changes so fast now we can’t keep up. My fairly new TV is apparently already a “dino” (cable installer guy didn’t think I’d understand this high-tech lexicon on phone call to his mother ship in front of me—get a less obvious code word, pally!), and suddenly we don’t need to connect our computers to a cable for internet connectivity at home, even without a router (what?). My shiny, year-old TV remote is archaic, outmoded, useless; my router obsolete. Cableboy won’t take any of it away with him.

What do I do with these antiquated accoutrements? The remote, the cables, the router…are others pouring same into landfill? Je refuse! I’ll find a home for them if it kills me. When I said to the Comcast guy and the TV wall-mounter guy in my living room, “Wow, I didn’t know you could tilt the TV like that on its brackets, there should be a remote for that,” they looked at me like I was some kind of sci-fi future-predicting genius. “I’ve never seen that!” one said. But I don’t want another damn remote. All I need is a sled, snow pants, hot cocoa with marshmallows, gift wrap, Jingle Bell Rock, and some people. That stuff doesn’t need upgrading. It never gets old.

Change: no! I like when people do their lights the exact same way every year. There is a little blue-lit tree outside somewhere (Tunbridge?) that, unlike nieces, never seems to grow up. That’s good. It’s

distressing when houses change hands and the usual trimmings change or disappear. Driving by my parents’ empty house is saddening. It’s been empty in winter in recent years, but this time it’s permanent – and no change is worse than permanent change. When the Barnard General store quit selling penny candy 30 years ago, I never recovered. It’s all still there, right where it belongs, the little wax bottles filled with colored ick, the caramels and the Smarties®, in my mind.

Some change is not so awful. That I moved from my beloved Bethel — not great. But I stay over a friend’s house (whom I used to live so close to that staying over never occurred to us) and we have spiked nog by the Christmas tree after her cat punches me repeatedly while I write (love the Siamese—naugh-ty) and, well, maybe a new tradition is in the making. When the old traditions fall off, due to death or dismemberment or some horrible new technology, they need replacing or we’re left with nothing.

I’ll start one now. Something you can see and think, “Oh good, there’s that thing again. A constant!”

You may enjoy what autofills in Google’s search box before you finish typing … endlessly amusing. Monthly, I might post the winners. For December:

“Does a…” autofills with

Et voila. Your inaugural autofill of the month. Little gift fer ya there, as you jingle around the clock. Good day.

Bumper Sticker Suggested by Harry One Year Ago when I Wrote we Were Told as Children (by the Catholics?) That Writing “Xmas” Instead of Christmas was Literally a Sin:

Let’s keep the X in Xmas!